Under a Bright Yellow Sky

When I've asked the students to describe different artists' styles, the most common descriptions are "detailed" or "not detailed." I figured I should show them what detailed really means, so I took in some Geof Darrow. He's one of those artists whose name has become a shorthand explanation. Any comics artist who uses lots of detail is inevitably compared to Geof Darrow--"it's hyperdetailed. . . .you know, a Geof Darrow kind of thing." But, unlike so many, Darrow makes it work. I took in Big Guy and Rusty the Boy Robot, because it is appropriate for all ages, unlike Hard Boiled. I told the students how long I expect it took for Darrow to draw a page, and they didn't believe me.

The class finished drawing their examples of the seven types of word/picture combinations, and we moved on to Chapter 8, which is about color. I have read many a black-and-white comic in my time, and in many cases have preferred black-and-white to lousy coloring, so I forget how hung up on color most people are. Some of the students have complained from the beginning about how Understanding Comics is black-and-white. Today their dreams came true, though, because we made it to Chapter 8, the chapter about color, which is the only color section in the book.

McCloud makes some good points about how color changes the way we see the image, and how it emphasizes specific objects. He also talks about how the two main factors in the history of color in American comics were "commerce and technology." Color is expensive and hard to pull off. (This is something I used to have to explain regularly to my Journalism students, who constantly insisted that the only way to make our school newspaper worth reading would be to print it all in color.) McCloud explains why, historically, American comics had such lousy color reproduction. And since there were such limitations to the color, the artists who did the best work with flat coloring were "masters of form and composition." McCloud specifically mentions Jack Cole, Winsor McCay, and Jack Kirby.

Here's an example of a page by Jack Kirby: 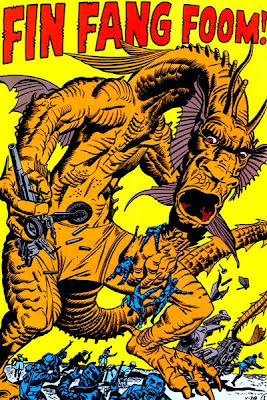 Even though the coloring is basically terrible--an orange monster against a yellow sky? Blue people standing on white ground?--the power of the drawing remains intact. It's still a satisfying picture, because it's Jack Freakin' Kirby.

Tomorrow I'll give them handouts with questions about Chapter 8. I know, I know . . . "Handouts with questions? How is that challenging them to learn in new and exciting ways? You've got to move higher on Bloom's Taxonomy! Instead of giving them sheets of questions, you should be assigning them to write and perform puppet shows that express their feelings about the material you've covered!"

Well, Straw Man, what you have to realize is that we teachers in the real world face many limitations. You can't do puppet shows every day; sometimes you've just got to get them to demonstrate that they've read the material.
Posted by LC at 4:50 PM