Tintin and the Mysterious Patterns of Organization

Today begins the last week of the quarter. Ideally, we should be at the end of a unit as the quarter ends, so that the semester's academic content divides up in an aesthetically pleasing fashion. This is my fourth year teaching and I think . . . I think . . . that for the first time ever, each class will be wrapping up a book right on schedule. Shazam! It's like I almost know what I'm doing.

Malcolm Gladwell tells us that if you want to become an expert at something, you need to practice for 10,000 hours. According to my rough calculations, I'm another four years away from teaching expertise, but at least I'm continually improving. 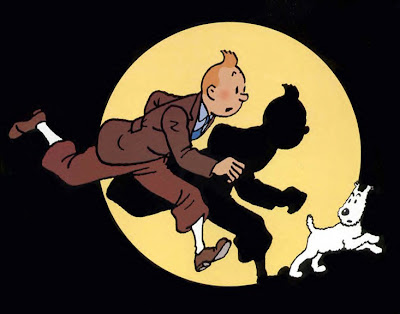 I started today's class by talking briefly about Herge's The Adventures of Tintin books, and his influential ligne claire drawing style. I own three Tintin books, so I passed those around the room. I did not get into question of whether, and to what extent, Herge was a Nazi collaborator, because once you start throwing around terms like "Nazi collaborator," it becomes difficult to focus on the clear-lined art style.

(Belgium was occupied by the Nazis, and just because Herge continued on with work as usual, that doesn't make him a collaborator, does it? A guy's got to make a living. Of course there were some anti-semitic cariacatures, and some other questionable content . . . it's complicated, that's all I'm saying, and I urge you to research the topic further.)

We went on to read some tips about reading informational text and about patterns of organization in text. Since the class is called Creative Reading (I didn't name it, or it would have been something like Introduction to the American Comic Book, and I could have had a ridiculously narrow focus, and come to think of it it's probably for the best I didn't get to choose the name) I've been intending, since the beginning of the year, to focus on some other types of reading. Today I finally got around to it. The patterns of organization we looked at are: Main Idea and Supporting Details, Chronological Order, Comparison and Contrast, Cause and Effect, and Problem and Solution.

What do you mean, that sounds boring? I'm an English teacher; this is what we do. It can't be all Batman all the time.
Posted by LC at 2:50 PM