Remember yesterday, how I didn't know what I was going to do in class today? Don't worry, I figured it out. You knew I would figure it out, right? I'm a professional. I have training and stuff.

I took in a big pile of comics and had the students get into groups and look through them for examples of Scott McCloud's seven different types of word/picture combinations. I mainly took in Tintin and Uncle Scrooge books, because I know they don't have offensive content, and they're thin, and it's easy to carry a big stack of them. I also threw a Kamandi Archives and a Fantastic Four Masterworks on the pile. Herge, Carl Barks, and Jack Kirby . . . does it get much better than that?

The whole "offensive content" thing has been a real limitation. There are many, many books I almost took in to show students, until I looked through them and realized they had a few words or images that might upset parents. Do you remember the news story a few years ago about the English teacher who lost his job because he assigned a graphic novel that a student's parents found offensive? I sure do. The graphic novel in question was Ice Haven, which is really good, and which I could easily imagine myself teaching, in a better world. But in this world, I have to play it safe. 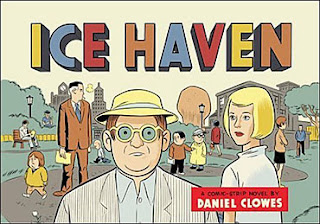 If you assign a novel, and the novel includes a scene where characters are naked, no one will mind. But if you assign a graphic novel, and there's a scene where characters are naked, then people freak out, even if it's tasteful and/or relevant to the story, because they can see it. Okay, not everyone will freak out, but there's always the danger that someone will. So we have not delved very far into the world of literary comics.

Anyway, today's assignment went pretty well, though there were some difficult judgment calls. It turns out the line between Additive and Interdependent can be pretty blurry.
Posted by LC at 7:56 PM