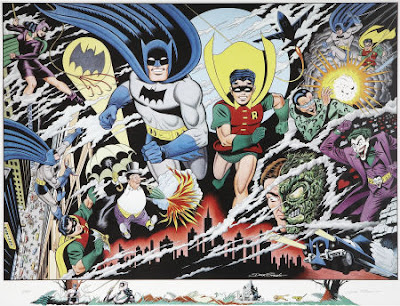 In other news, we had open house at school last night. Two sets of parents told me that their kids were saying good things about Creative Reading class, which is good to know. They generally don't risk saying anything positive in front of their peers.

They are now writing essays about Batman Year One, specifically about Jim Gordon. I was going to let them choose a character to focus on, but I realized that Gordon is really the only one with a character arc. He's miserable at the beginning, he screws up a lot in the middle, and he's better off at the end. The assignment is to write a six paragraph essay that tracks how Gordon grows and changes through the four chapters. Some of them are doing a great job, and have already made good progress; some of them are not taking the assignment seriously, and have done very little, and apparently don't realize how close the end of the quarter is. Hopefully they'll figure that out tomorrow.

There was a period of time when I grew sick of Batman and couldn't stand the character, until those five fellows I listed at the top, and Christopher Nolan, reignited my interest. I still like the character, and I have a great deal of love for Year One, but I'm kind of Batmanned out at this point. I'm looking forward to moving on to Persepolis.
Posted by LC at 5:47 PM