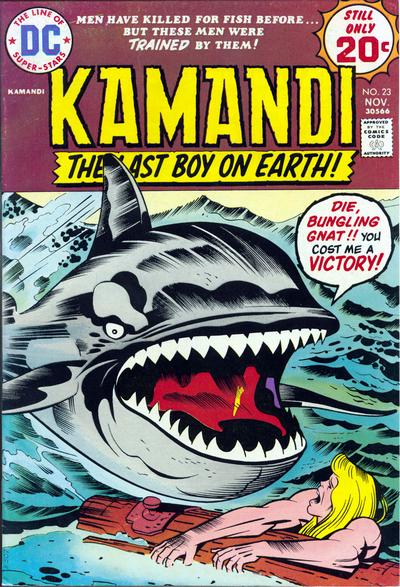 My cousin gave me a copy of this comic for Christmas many, many years ago. As a young lad I preferred superhero comics, and didn't much care for shirtless characters like Conan or Kamandi, so I didn't have very high expectations. And, though it pains me to say this, I found Jack Kirby's artwork strange and off-putting. But when I read it I was surprised by how much I enjoyed it. Years later I dug it out and read it again, and liked it even more.

I recently started reading Kamandi through from the beginning and, let me tell you, it is a lot of fun. It's really well drawn, too. When I was a kid comics fans mostly looked down on Kamandi--I'm pretty sure my cousin got a thick stack of Kamandi comics for less than a dollar. The problem is that it's overshadowed by Kirby's other work. If he had only done Kamandi, it would probably be remembered as one of the all-time classics (though if Kirby hadn't come along until the 70's the history of American comics would have been completely different, so who knows how it would have been received.) Also, people claim that Kamandi just a Planet of the Apes rip-off. But the Avengers is just a Justice League of America rip-off, and no one seems to mind that.

Anyway, here's a cool picture of a big scary shark! Enjoy!
Posted by LC at 7:11 AM