So I realized that, when I've shown the students comics, it's always been mass-produced stuff. But part of the magic of comics is that anyone can make them--all you need is some paper and a pen, and if you have access to a photocopier, you can make your own small print run. I wanted to show them some small press comics, so I took in issues #1-4 of one of my favorites, SPUDD 64. 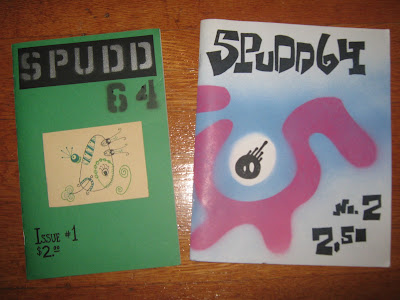 These four comics were written, drawn, and produced by Matt Kish between 2003 and 2006. SPUDD 64 is hard to describe, but I would say it follows in the tradition of George Herriman's Krazy Kat, Larry Marder's Beanworld, and Jim Woodring's Frank. That may sound like I'm over-selling it, since Krazy Kat, Beanworld, and Frank are three of the all-time great comics, but bear with me. SPUDD 64 is like those other three comics because it has no interest in anything as mundane as recreating the real world. In comics, where artists are bound only by the limits of their imagination, why should they limit themselves to the real world? Why even imitate it? We see the real world every day; art can take us to places that are much more interesting. Comics, more than any other medium, allows artists to create new worlds, worlds that follow their own rules.

SPUDD 64 is the story of a vegetable-creature named SPUDD, the 64th in his line, spawned in a god/tree/spaceship named Tzadkiel, and sent out to find his place in the universe. That description doesn't do it justice, but no description would. You can't read about the story; you have to read the story, and enter into the fictional world that Kish creates. Once you let go of your preconceptions and allow the story to work its magic, the world of gods and monsters and magic tree beings all makes perfect sense, and seems to be communicating some deep spiritual truth you can't quite put your finger on. 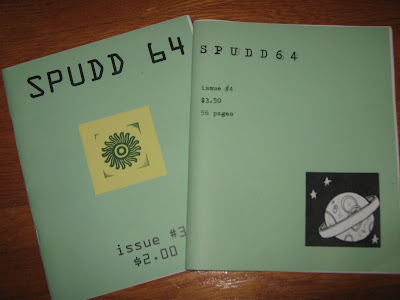 Look at those covers! So lovingly hand-crafted. Each one is unique, so if you got your own copies, they would look slightly different. I like a well-produced hardcover book from a major publisher as much as the next guy, but there's an unmistakable charm to small press comics like these.
Posted by LC at 7:05 PM