"Whoever told her she was masculine must've been blind, deaf, and dead." 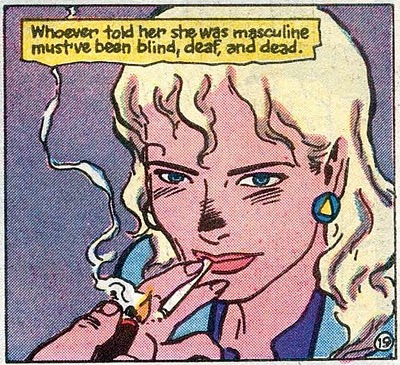 Today we started on Batman Year One Chapter Three. Batman punches a guy through a wall! Selina and Holly get rabies shots! Gordon begins an affair with Essen (shown above)! I can't get over how much happens in each chapter. And I keep noticing new things . . . I'd never realized before that almost a month and a half passed between Selina leaving Stan's employ and getting her Catwoman costume. So much time can pass in just a couple of pages; you almost never see comics paced like this.

Class today went fine. I gave them handouts to go along with Chapter Three. Nothing unusual to report.
Posted by LC at 2:13 PM