"Merkel. Get Dent. Forget to tell the Commissioner." 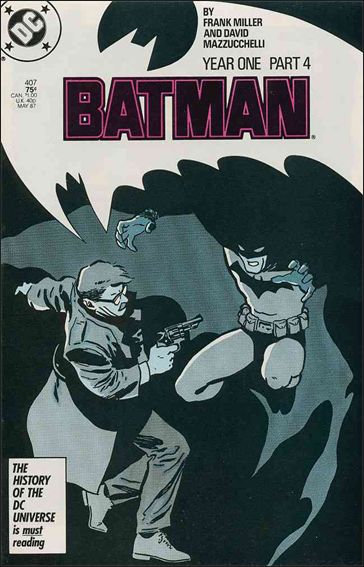 And so we made it to Chapter Four, the conclusion to Batman Year One.

Back in the heyday of the Comics Code, government officials had to be shown in a positive light, criminals had to be depicted as conspicuously evil, and criminals always had to go to jail in the end.

Throughout this book all aspects of Gotham City--especially the police, but also the mayor--are shown as being ridiculously corrupt. This corruption is, presumably, why the city needs a vigilante dressed like a bat. At the end of the story, none of the criminals really go to jail. Dirty cop Flass works out a deal and rats out the equally dirty Commissioner Loeb. Loeb resigns, but Gordon says, "I don't think Dent has a chance of putting him behind bars." Loeb is going to be replaced by Grogan, "who's worse." The big mob boss, The Roman, is still at large. This a whole new world, profoundly different from the one Batman used to inhabit in the sixties. Evil isn't something that shows up out of nowhere, dressed in a funny costume. It's systemic. You can't defeat the evil of the world; you can make a stand and inconvenience the people in charge, but they'll only be replaced by more.

That sounds kind of bleak, but when you look at Jim Gordon on the next-to-last page, standing there smoking his pipe, he looks so happy. Sure, the never ending battle against evil is tough work, but having a pal on your side makes it all worthwhile.
Posted by LC at 2:20 PM