Occasionally someone asks me what my favorite comic book is. That's a difficult question--it's like asking a regular person to name their favorite song, or movie. I like a lot of different comics. When forced to name just one, though, I usually say Flex Mentallo: Man of Muscle Mystery. 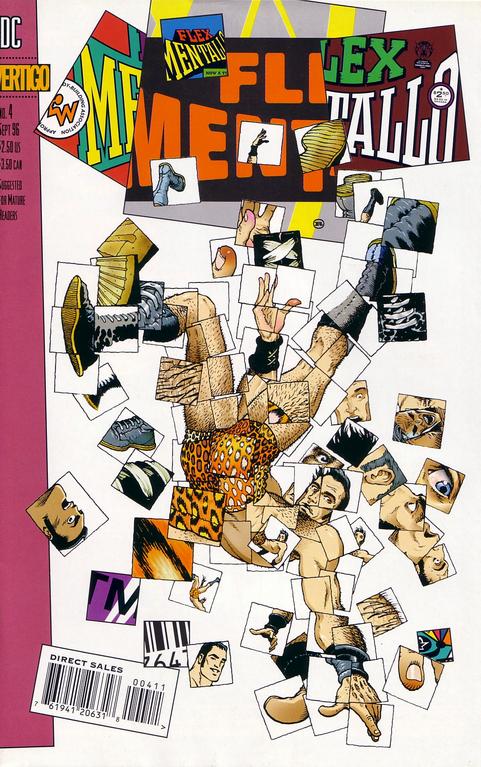 Flex Mentallo was a four issue mini-series that came out from Vertigo (the R-rated branch of DC Comics) in 1996. It was written by my favorite comic book writer, Grant Morrison, and starred a character from one of my all-time favorite series, Grant Morrison's Doom Patrol. When the first issue came out, I wasn't too sure about it. I grew to like the series more and more, so that I was excited by the time the fourth one came out. I took it with me to the movie theater where I worked and when I read it on break I felt an indescribable sense of joy, a feeling that I was reading the story I'd waited my whole life for. The kind of feeling you don't get very often, particularly as you get older.

I vowed that, when the inevitable trade paperback collection came out, I would buy multiple copies and give them to friends. That way others could share the love and, by reading Flex Mentallo, come to better understand me as a person. Unfortunately there were legal problems and that paperback never came. After fifteen years of waiting, though, there is good news--the Flex Mentallo hardcover is coming out early next year.  Pre-order your copy today!

As much as I like to imagine other people reading the book and being overwhelmed by its glory, it is a comic book about comic books, and I imagine that most people wouldn't respond to it as strongly as I did. Also, most people would probably find the story incomprehensible. It's very nicely drawn, though, and I connected to it on a lot of levels.

Shortly after I graduated from college I had vague plans to write something academic about Flex Mentallo. I was slow, though, and people beat me to it. I lost my chance to be the world's preeminent Flex Mentallo scholar; but in my heart I know I'm Flex Mentallo's #1 fan.