"If you make yourself more than just a man, if you devote yourself to an ideal, you become something else entirely. Are you ready to begin?"

The students have been doing a lot of handouts lately so I wanted to mix it up and show them a movie. The animated movie of Batman Year One is coming out October 18th. It is not, however, out today, so we started watching Batman Begins. You know, this one: 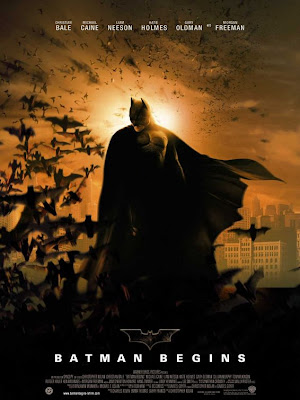 The students are watching it and taking notes on how it is similar to and different from Batman Year One. Batman Begins is not an adaptation of Year One, but it does steal various concepts, characters, and themes from the book. Corrupt cop Flass and mob boss Falcone are in the movie, for instance, and so is the SWAT-team-coming-after-Batman scene. The James Gordon in the movie is similar to the one in the book, though the movie version has been in Gotham for years, instead of just transferring in from Chicago the same day Bruce Wayne returns. And while the book starts off with Bruce returning from his travels abroad and never gives even a flashback to show where he's been, the movie spends a great deal of time on his training.

But you don't have to do this assignment, so I'll stop giving you the answers. Batman Begins is a fun movie and I think they'll enjoy it. Also important, playing a movie is something easy for the sub to do. That's right, I will be going out of town tomorrow, so my class will be in the hands of a stranger. I hope everything goes well.
Posted by LC at 6:18 PM