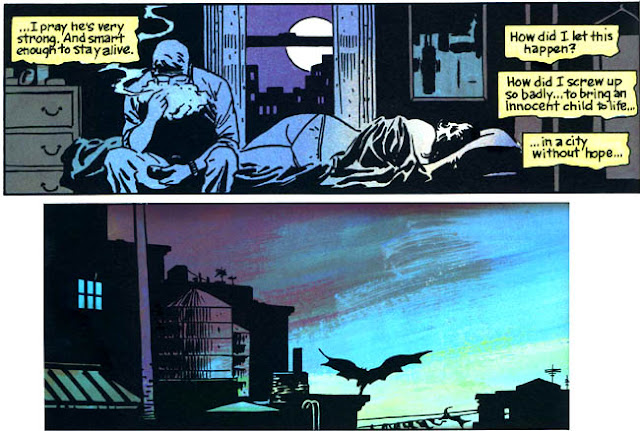 And, for the first time, the quote in the title actually matches the picture. That's some impressive blogging, there.

I love the painted sky in that second panel. David Mazzucchelli's black and white artwork is great, and then the coloring by Richmond Lewis adds a whole new dimension. I just found out yesterday that Richmond Lewis was David Mazzucchelli's wife. Frank Miller always used to get his wife to color his work, too. Was that the fashion back in the 80's?

Today in class we started chapter 2, and it went well. Some days it goes well. When that happens it's important not to start thinking that you've got it all figured out and that every day from now on will be great. That's a surefire way to set yourself up for disappointment. Things happen, good and bad, and you never know what the next day will be like until you get there. But today Bruce Wayne dressed up like a bat and committed 78 acts of assault in five weeks, and all was well.

For those of you playing along at home, here are some questions about chapter 2. This assignment is worth 20 points, so be sure to answer each question completely.


1. Based on its use on page 26, what do you think the word “gestapo” means?
2. Compare and contrast Gordon and Branden’s approach to police work.
3. On April 5th, why can’t Commissioner Loeb get rid of Gordon?
4. What does Barbara make for dinner on the night of April 9th?
5. Describe how Batman’s first night out goes. Give specific details.
6. As of May 15th, what has Batman been doing over the past five weeks? Where and at what times?
7. When a criminal fires point blank at Batman, how does Batman survive?
8. Why do you think Batman singled out Flass?
9. What does Batman do on the night of May 19? Be specific.
10. On May 20th, why has the commissioner changed his mind about Batman?
11. On June 5th, whose car does Batman steal?
12. On June 6th, who does Gordon suspect of being Batman?
13. On the night of June 6th, what does Batman do that leads to him being cornered by the police?
14. Why do you think he does it?
15. Describe the situation Batman is in at the end of the chapter.
Posted by LC at 2:03 PM

Email ThisBlogThis!Share to TwitterShare to FacebookShare to Pinterest
Labels: batman year one, what kind of day has it been