We have now read the first two chapters of Persepolis in class. 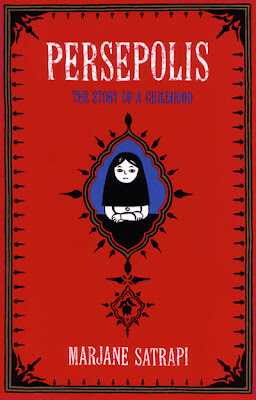 Persepolis is an autobiographical graphic novel by Marjane Satrapi about growing up in Iran in the 1980s. In the introduction she says that many people imagine that all Iranians are crazy fundamentalist terrorists, and her goal is to show people that that's not true.

Reason #6 is probably the most important one. If I want to check out a class set of a graphic novel from the public library, my two choices are basically Maus or Persepolis. Persepolis wins out over Maus for the reasons listed above and also, crucially, because I get depressed enough in my daily life without teaching a book about the holocaust.

But if you haven't read Maus, you probably should. It's, like, real famous and stuff.
Posted by LC at 7:55 PM