Today we read two chapters of Persepolis, "The Sheep" and "The Trip." We are now a little over halfway through the book, so tomorrow we are going to have a quiz over the first eleven chapters. 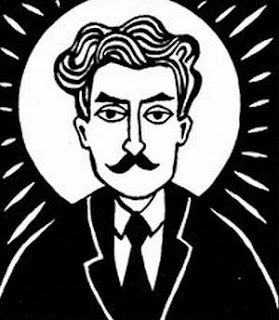 "The Sheep" is, in my opinion, the most emotionally powerful chapter of the book. In the previous chapter Marjane met her uncle Anoosh for the first time and they immediately formed a close bond. In this chapter Anoosh is living with Marjane's family. Initially he is optimistic that the revolution is going to work out for the best, and that the Islamic fundamentalists are not going to stay in power, but things go downhill quickly. Before you know it, his old revolutionary friends are being rounded up and murdered.

As I mentioned before, things do not end well for Anoosh. He is arrested and thrown into prison. As he awaits execution, he is allowed one guest. He chooses ten-year-old Marjane. The scene where she comes to visit him is touching and sad, and gets me every time. He tells her she is "the little girl I always wanted to have," a sentiment that probably affects me more since I had a daughter. Shortly afterwards Anoosh dies, and a miserable Marjane, who had previously wanted to be a prophet, tells God to go away and never come back. She feels lost, a feeling that is represented by a full-page illustration of Marjane drifting in the black void of space. Satrapi takes advantage of the comics medium to represent that emotion in a way you couldn't in prose.
Posted by LC at 3:02 PM