The movie version of Persepolis won a bunch of awards in France but, when it was released here, it bombed. The upside of this is that I was able to buy the DVD at Walgreen's for $5. In the past when I've taught Persepolis I've rented it, but now that there are no movie rental stores I'm glad I lucked into that DVD.
We've read about half the book and we took a quiz yesterday, so I decided to show the students the first part (about 23 minutes) of the movie. The movie adapts both Perseoplis and Persepolis 2, so it breezes through the part of the story that we've read, and leaves out tons of material. It also changes around and adds scenes. Fortunately it keeps the uncle Anoosh scenes mostly intact, and they are as sad in the movie as they are in the book. And I love the animation.

After that we looked at five literary elements of Persepolis, and I'll probably write more about that later. Right now I'd like to tell you about the Jack Kirby Museum & Research Center.

When I first heard about the Jack Kirby Museum, founded in 2005, I was eager to visit.  It turned out, though, that there was no physical location--the Kirby Museum was a website, an educational initiative, and a collection of artwork. Which is good and all, but wouldn't it be nice to visit an actual Kirby Museum? You may think a museum based around a cartoonist sounds ridiculous, but I've been to the Charles Schulz Museum in Santa Rosa, and it was one of the most profoundly spiritual experiences of my life. Though that probably says more about me than about the quality of the museum, it is also an excellent museum.

Anyway, yesterday I opened up my Inbox and received a press release from TwoMorrows publisher John Morrow. He said . . . you know what, I'll quote him:

Inspired by recent events, most notably the legal battle between the Kirby family and Marvel/Disney regarding ownership of Jack's work, we believe that it's time for the Jack Kirby Museum to step out of the digital realm and into the physical. We intend to open a physical space on the Lower East Side of New York City, in the same neighborhood where Kirby grew up. Economic realities being what they are, this initial effort will be a "Pop-Up" space of approximately 1,000 square feet that will remain open for roughly three months. Having such a space in one of New York City's most vibrant neighborhoods will allow us to showcase educational programs, lectures, exhibits and more to pay tribute to one of the greatest storytellers of the 20th Century. We are already reaching out to art collectors and educators in anticipation of opening.
He goes on to ask for donations.  I don't know about you, but I think this is a worthy cause. I can understand potential objections . . . "There's a recession on! I'm too worried about putting food on the table to donate to some comic book museum!" Fair enough. Or, "There's a recession on! If I'm going to donate money, I'm going to give to some charity that feeds the hungry!" And I agree, these are all hard times, and we should all do what we can. Anyone who can spare a few dollars should absolutely donate to a worthy cause, be it their local food bank, Heifer International, the Red Cross, Habitat for Humanity, or whatever charity you prefer.

I also believe, however, that art is important, and culture is important, and that museums enrich our society in valuable ways. And I think the artwork of Jack Kirby is life-affirming and soul-enriching. I think it makes the world a better place. So I'm going to send them a few dollars, and I urge you to do the same.

Unless, of course, you don't really like Jack Kirby's artwork, in which case you're definitely better off with Heifer International. 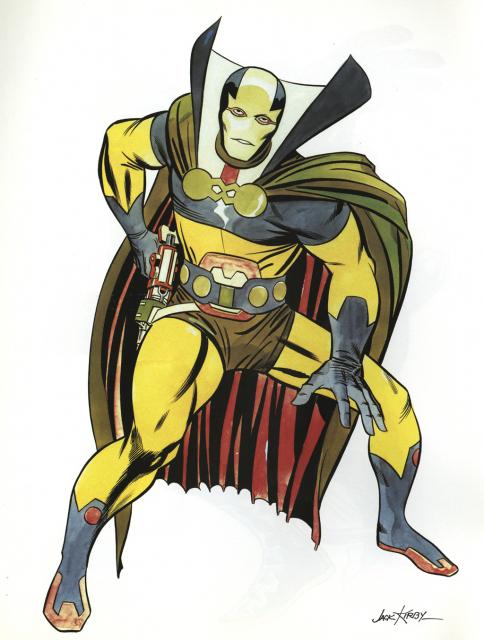