Bad news: I was under the impression that the school had ordered 20-ish copies of Understanding Comics by Scott McCloud to use as my main textbook. It turns out that the order was never placed, and now it is very unclear whether I'll be getting those books (I don't know if you've heard, but public schools are not currently rolling in the money.) I still plan on using Understanding Comics, even if I can't get the 20-ish copies, but it's an annoying setback.

I currently have one copy: 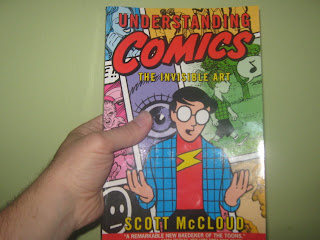 Good news: I emailed eight major comics publishers (Pop Quiz! Can YOU name eight American comic book publishers?) asking if they ever donated comics for educational purposes. So far I've gotten two replies, one of which said no, but said it very politely, and the other of which said maybe. I'm optimistic about that second one, and there are still six more publishers to hear from.
Posted by LC at 1:10 PM