Yesterday I said one class was more enthusiastic than the other. That was a total rookie mistake. The minute you start to think of one class as "the good class," things will go terribly wrong, and the class you thought of as bad will go just fine. It doesn't pay to try and predict these things. Today the "enthusiastic" class was painfully bored. So, no more generalizations about the two classes. We all have our good days and our bad days.

Man, I'm tired. I'm not back into the swing of things yet.

Today we read the rest of Understanding Comics chapter 1. In retrospect, it was too much theory at once and, as mentioned above, some of the students were overwhelmed and bored by it. I need to remember that, while I may find this stuff fascinating, I am not an average teenager.

We also talked some about comics history and I showed them some Little Nemo in Slumberland. Fortunately I own a decent sized comics library, so if I need an example of a famous comic, I can usually pull it off a shelf. I've got a couple of books of Little Nemo reprints.

Little Nemo--normal people don't know this stuff, do they? No, I suppose they don't. Allow me to elaborate. Little Nemo in Slumberland, drawn by Winsor McCay in the early 20th century, was one of the first great newspaper comic strips. It ran in the Sunday paper, and each each installment took up a whole page, and so was approximately the size of a beach towel. It's elegant, imaginative, and gorgeously drawn. Here's a random page, about one-millionth of the original size: 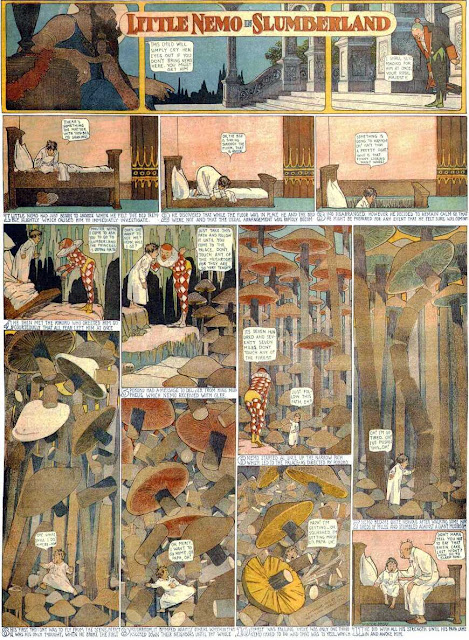 Don't worry that you can't read the words; they're much less interesting than the pictures.﻿ Check out those mushrooms!
Posted by LC at 6:02 PM