When I was in first grade I got my first comic book, an Archie Christian comic, which I enjoyed at the time even though it was completely terrible. This tells me that I was predisposed to like comics no matter what. Soon after I got my first super-hero comic, Batman #340. There’s nothing special about this comic, but, you know, it’s Batman. What impressionable child doesn’t love Batman? 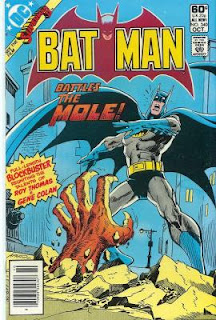 Later that year my family went to Philadelphia so my father could attend a library convention. Every night we would go to the 7-11, and my parents would buy me one comic book (they were only 60 cents each). I can remember which ones I got--an Archie, an issue of The Defenders, and an issue of Marvel Team-Up that featured Spider-Man and the Human Torch fighting Speed Demon. Those comics are vivid in my memory, much clearer to me than any other part of my first grade year.

I tagged along with my parents or my grandmother on every trip to Food Fair, or Begley's Drugs, or the gas station, then begged whoever I was with to buy me a comic book. I built up quite a collection, for someone with no disposable income. My great aunt thought the comic books were silly, a waste of time. Fortunately for me, my mother did not share this opinion. She believed that comics promoted literacy. And they do. Comic books teach you that reading is fun. They feed your imagination. They even provide SAT prep, by teaching you vocabulary words like "omnipotent" and "inexorable."

In retrospect, I am amazed by how much my parents encouraged me to read whatever I wanted. I mentioned earlier that in Philadelphia I got an issue of The Defenders. That issue focused on a character called Hellcat, who had learned that she was the daughter of Satan. The story consisted of her traveling through Hell, talking to her father.  I remember lying on the hotel floor, trying to puzzle this out—I was only six, remember. I asked, "What does S-A-T-A-N spell?" Without pausing my mother said, "Satan." Growing up in the Bible Belt, I would come to know plenty of kids whose parents forbade them to read certain books, or play certain games, or watch certain movies, because of imagined demonic overtones. This was the 80’s, when televangelists could find pagan symbolism in My Little Pony cartoons. But I, at age six, could read a story that actually featured Satan as a character, and my parents didn't freak out. I will always be grateful for that.
Posted by LC at 9:22 AM