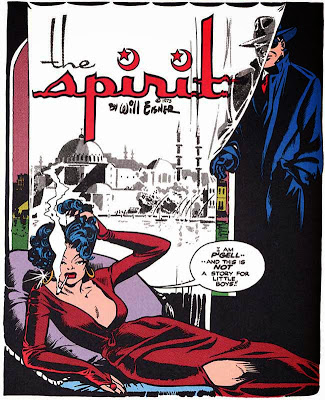 In theory my employers could read this blog--I don't think they'd want to, but they could--so I try to avoid saying anything like, "Man, I did a bad job today!" I will admit, though, that my plan today really didn't work.

This was Day 2 of the Will Eisner documentary (Eisner's the guy who drew that picture up there.) I like the documentary. It's got a lot of good information and it's targeted at a general audience. And since Will Eisner was around at the beginning of the American comic book industry, you also get a good history of the industry as a whole, including some footage from the 50's Senate hearings that brought about the creation of the Comics Code.

"Sure, that's interesting to you," I hear you say, "but do you think it's interesting to an average high school student?" No, don't be ridiculous. How naive do you think I am? But the most important part of a high school education is learning how to learn, no matter what the subject matter is, no matter whether you personally find it interesting or not. Many people don't find Precalculus, or Economics, or Chemistry interesting, but they still do the work and get good grades in those classes. Even if you find a class boring, you can still power through. Don't get me wrong, I'm not saying I want my class to be boring. I do everything I can to make it interesting. At the end of the day, though, some people just won't care about the subject matter, and that's okay.

So that's why I had to give the students an incentive to watch the documentary. As I mentioned yesterday, I passed out a sheet of questions for the students to answer as we watched the documentary. It seemed straightforward, but they had a terrible time watching the movie and keeping track of the questions. After every question, half the class asked me what it was, because they had missed the answer. It's not that they weren't paying attention; they were genuinely trying, and missing the answers. It got really frustrating, because it became apparent I did not do as good a job as I thought making up the questions.

And remember how I said the documentary is for a general audience? That's what I assume, because I already know everything they talk about in it. I've heard all this stuff a million times. So what seems clear to me, when rapidly explained by a talking head on a screen, may not be clear to the average viewer.

I dunno, those are just theories. I don't know why it didn't work, but at the end of class, the students were pretty baffled. Tomorrow I'm trying something different.
Posted by LC at 6:15 PM