Blame it on the Rain

Here's a page from Will Eisner's A Contract With God: 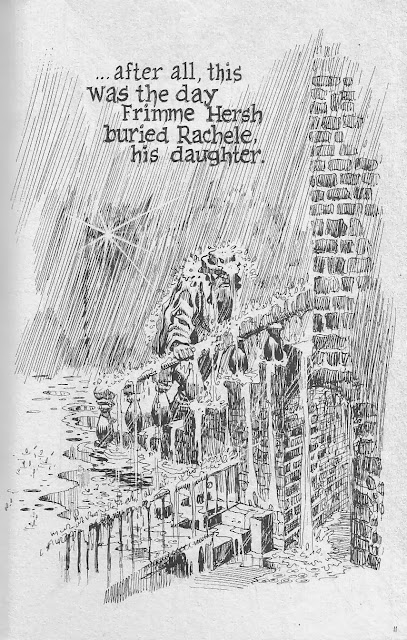 What this view of Eisner leaves out, though, is how thoroughly he blurred the lines between writing and drawing. Look at that page again. The words may not seem all that impressive. What really really hit me the first time I read A Contract With God, though, is that Eisner is writing with the pictures. Every line on the page is part of the story. Instead of using paragraphs of prose to describe the scene--the man hunched over, the street light in the background, the rain pouring down over everything--he brings it all to life. Can you imagine any writer who could describe that rain as vividly as Eisner does here?

So anyway, today in comics class we watched the end of the Will Eisner documentary. The final third takes you from the 70s up to Eisner's death in 2005, and along the way it covers underground comics, Eisner returning to comics after years away, A Contract With God, his graphic novels, and the people he influenced. Good stuff.

I mentioned before that students were having trouble answering the questions I gave them, so today I had them watch the video and list ten things they learned. That worked better. I also reminded the students about the existence of this blog, and told them that I would post a secret code word tonight, and that the first person to tell me the code word tomorrow will get extra credit. The word is "flamingo." Now you know.

Tomorrow we wrap up our look at the titans of the comic book industry (by which I mean Harvey Kurtzman and Will Eisner) and return to Understanding Comics. I wanted to give the students a break from the textbook, but I fear the break has lasted too long, and I'm going to have to hurry to get back on schedule. 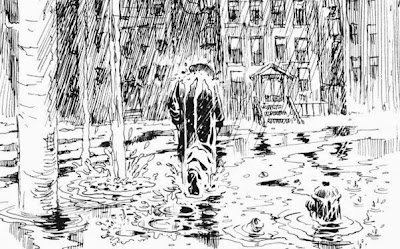