Battle of the Superheroes

The students finished up their test on the second half of Understanding Comics, and I collected their books. We've finished the theoretical portion of our reading; now it's time to read some good ol' fashioned fiction. Soon we'll be starting Batman Year One. And since we recently spent some time reading Superman stories, wouldn't it be an effective transition to watch something that includes both Superman and Batman? Yes. Yes it would.

So after we finished the test, I showed the class "Battle of the Superheroes," an episode of the cartoon series Batman: The Brave and the Bold from the Season 2, Part 2 DVD. 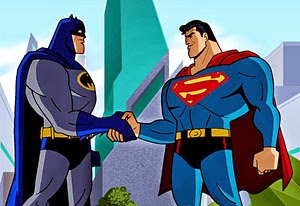 Brave and the Bold is a lighthearted series aimed at young viewers that ran from 2008 to 2011. Every episode features Batman teaming up with another super-hero, like Green Arrow or Aquaman or Blue Beetle. It's over-the-top, with extensive fantasy and science fiction elements, basically the opposite of the Dark Knight style Batman.

I don't know that I would have hated Brave and the Bold when I was a teenager, but I definitely would have disapproved of it. There is a time in a young man's life when he wants a grim, serious Batman who deals out brutal vigilante justice and then goes home and cries over his dead parents. And then there comes a day when that young man must put his adolescent angst behind him, and admit that maybe, just maybe, fun is not such a bad thing. I used to think that Frank Miller's Dark Knight Returns was the definitive version of Batman. Now I think that Batman was invented to entertain children, and while there may be a certain dark edge to the character, he shouldn't necessarily be a brutal sadist. Now that I'm old and wise, the Brave and the Bold Batman is my favorite Batman.

(I guess I should mention that there is no one definitive Batman; I'll talk about that more in the days to come.)

Anyway, there were legal issues that kept Superman from appearing on the show, until this episode. And the creators went all-out to cram in as much Silver Age Superman lore as possible. If you watch this episode, you get all the essential elements of Superman circa 1964, including:


It's also funny. After Superman seemingly turns evil, there's a scene that goes like this:

My students found that wildly amusing. They were engaged throughout, and laughed in the right places, so I guess they're not as snobby about Batman as I was when I was their age.

That said, we'll be starting Batman Year One next week, which my teenage self would totally approve of.
Posted by LC at 8:00 PM