I had one of those days today where you feel like everything you're doing is useless, as though the whole world is against you, and eventually you realize that you're just really sleepy. I don't know why, since I got about the usual amount of sleep last night, but all day I was in a grumpy haze. And yet I am a professional, so I carry on. Against impossible odds! Like a warrior born! 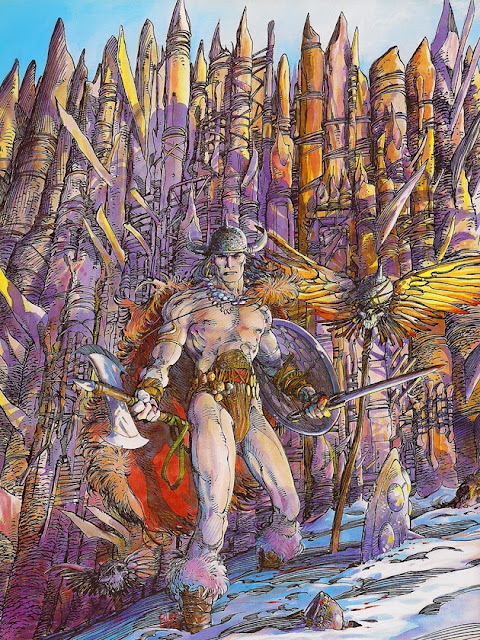 Last Friday we started working on describing different art styles. This is not a skill most people pick up along the way, so it takes some practice. We brainstormed a list of words that you could use to describe different styles of art, including:

. . . and so on. I was planning on banning the use of "realistic" and "detailed" this year, because they get so overused that they don't mean anything, but I went ahead and allowed them. They can be useful in small doses; that Barry  Windsor-Smith drawing up there, for instance, is pretty realistic and detailed.

Today we practiced describing art styles again, and I'm happy to report that they're getting better at it. See? Even when I'm tired and cranky, I am empowering students to learn.

After we did an art description activity, we started reading Understanding Comics chapter 8, which is about color. Have you ever given much thought to color in comics? It used to be a lot cruder. Digital coloring has opened up whole new worlds of possibility, but it hasn't always made things better. Check out this article by Thomas Scioli about Barry Windsor-Smith, where he compares the original 70s coloring on Windsor-Smith's Conan comics to the modern digital recoloring.

In the modern version, Scioli writes, "The colors are muted and secondary. This is the color you get when you lay a night time color layer over everything. It’s the comics equivalent of “day-for’night” filming. It flattens the whole scene. It creates a convincing illusion of night, of rods and cones kicking in, but it is not inviting. It makes you view this as a photo rather than a tableaux you can wander around in. The reader is less likely to linger, more likely to quickly scan over."