Portrait of a Sequential Artist

I bought a DVD for my comics class. We hard-working American public school teachers often invest our own money in school supplies. Not because we have to, but because we're doing it for the kids, doggone it.

Anyway, I ordered this: 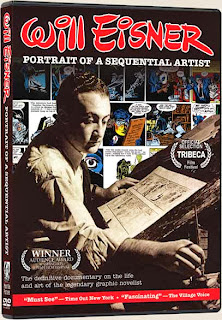 That's Will Eisner: Portrait of a Sequential Artist, a documentary written by Jon B. Cooke and directed by Andrew D. Cooke. I was watching it last night, making notes as I went so I could give the students questions to answer. My wife was watching it with me. After awhile she said, "Aren't you worried the kids might find this kind of . . . boring?"

I was baffled. "But Loving Wife," I said, "this is about the early days of the comic book industry. What could possibly be more interesting?"

"It's a lot of old guys talking," she said. And it's true. The old guys include Will Eisner, Joe Kubert, Kurt Vonnegut, and Art Spiegelman, and other heroes of mine that I could happily listen to all day, but your average high school student is not going to want to listen to old men talk, no matter how scintillating their observations. Which is why I gave them a handout of questions to answer as we watched, forcing them to pay attention.

That's the theory, anyway--in practice, the students often listen for the answers to the questions and miss most of the context. Education is not a perfect science.

We're going to watch this documentary the next couple of days in class, so I'll go into more detail tomorrow. For now, let me just say that if you are at all interested in the history of the American comic book industry--that is, if you are a true American--then this movie is worth your time.
Posted by LC at 6:18 PM