Also, I reread my blog post from the first time I taught this story, back in 2011, and was disappointed to discover that I used the same picture of Superman kissing Lori Lemaris both times. At least the coloring's different.

Today in class we had a brief discussion about Superman. One of the students said that he doesn't really like Superman because he's too powerful, and so everything is too easy for him. This is a common complaint. If your hero is nearly all-powerful, how can there be dramatic conflict in the story? Jerry Siegel figured this one out early on. Though Superman is able to deal with any criminal who shows up, he still has trouble with his love life. From his first appearance, he's interested in a girl who only has contempt for him when he's dressed up like a civilian. The secret identity, and the love triangle, are important parts of what make Superman work. Look at "The Girl in Superman's Past"--there's plenty of conflict, and Superman's powers are useless to resolve it.

My students also read a Stardust story by Fletcher Hanks. Stardust is a Superman imitation written and drawn by someone who completely misses the point of Superman. Instead of living among humanity, Stardust lives on a private star. Instead of being a hero, he's a bully. 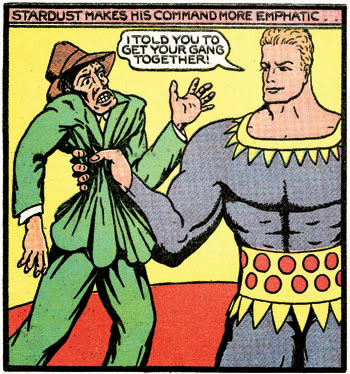 Like Jerry Siegel, Fletcher Hanks had to solve the narrative problem of how you make a story about an all-powerful protagonist interesting. Hanks's solution was to spend most of the story focusing on the criminals, showing their evil deeds in lurid detail, with Stardust only showing up at the end to punish them. Stardust is less a character than a source of terrible retribution, inflicting more gruesome carnage for the readers' delight. This plot structure works surprisingly well, though I don't think you could keep it going indefinitely.

My students had a write a short essay comparing Superman to Stardust. Probably their best observation is that while "Superman" sounds masculine and heroic, "Stardust" sounds like a stripper's name.
Posted by LC at 8:35 PM