Corpse on the Imjin

This year I actually have some students who are interested in Superman, which is nice. Sometimes they ask me questions, because I know an absurd amount of comic book trivia--really, absurd--and I can generally answer their questions. For instance, they asked who the first super-villain that Superman fought was, and I told them it was the Ultra-Humanite. My next instinct was to talk more about the Ultra-Humanite--who was not a super-villain in the sense of having super powers, more of a mad scientist with a catchy name--but I must resist that urge. The goal of the class is to develop students' reading and writing abilities. Comic book trivia does not further that goal. So as much as I wanted to, I did not lecture the students on the different varieties of kryptonite.

This is where most of the super-heroes you've heard of come from. Superman came out in 1938, other publishers wanted to get in on that action, and within the next three years you saw the debut of Batman, Flash, Green Lantern, Hawkman, Captain Marvel, Plastic Man, Captain America, the Sub-Mariner, the Human Torch, and hundreds more. But it wasn't all super-heroes; there were humor comics, crime comics, horror comics, funny animal comics, science fiction comics, war comics, and more.

Publishers were demanding this stuff, but it was up to writers and artists to produce it. Many were only barely competent, some were terrible, and a few were brilliant. Of those brilliant creators, probably no one was more influential than Will Eisner, Jack Kirby, and Harvey Kurtzman. You remember Jack Kirby? He's the guy I write about all the time. I've read vast amounts of Kirby, quite a bit of Eisner, and sadly very little Kurtzman. Fortunately, Fantagraphics recently put out this book: 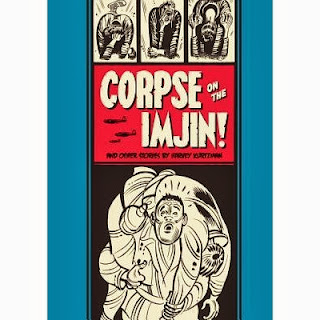 That's "Corpse on the Imjin" and Other Stories, by Harvey Kurtzman, a collection of the war stories he did for EC Comics in the 50s. When this came out some people complained that the stories are printed in black-and-white, when they were originally published in color, but I think they look great.

Today in class we read and discussed "Corpse on the Imjin," the story they named the book after. It's six pages long, is set in Korea, and starts with an unnamed American soldier sitting and watching corpses float down the river. It ends with a fresh corpse floating down the river. It's probably not the kind of story you would imagine if you heard the phrase "war comic." The students found it pretty depressing, which is an appropriate response.

While Kurtzman is probably better known as a writer than an artist, he both wrote and drew this, and you can see that he's a world-class cartoonist. The highlight of the story is on page five. The American soldier is in a life-or-death struggle. His only hope is to drown the enemy solider. Look at this: 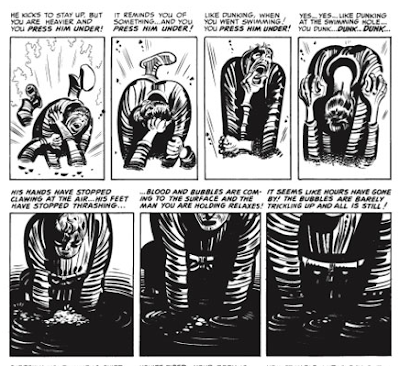 That is INTENSE. Look at how Kurtzman keeps the focus on the soldier, carefully choreographs his movements, and gradually zooms in. Notice the bold black lines, and how as we zoom in the panels are filled more and more with black. look at the soldier's expression in panel three; check out that layout in panel four. Even as you analyze the individual pieces, you can't quite pin down the magic, the tremendous force generated when you make that transition from panel four to panel five.

Like I said, I haven't read much Kurtzman, but just these seven panels make it clear that he was a master of the medium.
Posted by LC at 8:57 PM