So how did Comics Class go, overall? That's the question I've been intending to answer on this blog ever since class ended back in December. I wrote about the planning stages, and the day-to-day activities, so it only makes sense that there should be some kind of self-evaluation at the end. But it's taken me awhile to figure out what I think. As with most human endeavors, the end result is hazy and ambiguous.

Over the last few weeks people have asked me if the class went well and I have said yes, the class was a success. I meant that. The students did their work and most of them passed, many of them with good grades. I followed through on my plans, with some tweaks along the way, and covered most of the material I set out to cover. I learned what worked and what didn't.

But I also have a sense of disappointment. Even though it's important for teachers to focus on realistic, achievable, and measurable goals, we usually can't help ourselves. We don't just want kids to earn credit toward graduation; we want to Change Young Lives and Resculpt the Face of the Future. In my case, I wanted to change the students' perceptions of comics.

That's not a huge deal, in the grand scheme of things. At certain points in my life I have changed my mind on much bigger matters, after being convinced by a conversation, by a life event, or by something I read. I have, in the past, said, “Oh, I never thought of it that way; I guess I was wrong.”

That always seemed natural to me, so it took me years to realize that this was a fluke; most people don’t change their minds. And most of those people who don't change their minds consider their consistency to be a virtue. Studies at the University of Michigan show, in fact, that when you demonstrate to people that their beliefs are based on incorrect information, they entrench themselves more. If you show people that they are wrong, they become wronger.

To me, the idea that comics is a legitimate artistic medium is incredibly straightforward. Narrative is accepted as art; pictures are accepted as art; accepting pictures used as narrative as art should not be that big a stretch. The reason comics are generally considered juvenile trash is basically an accident of history, having more to do with pulp fiction publishers of the early 20th century than with any inherent values of the form itself.

(For a detailed look at those publishers who defined what we think of as American comic books, I highly recommend Gerard Jones' Men of Tomorrow: Geeks, Gangsters, and the Birth of the Comic Book.)

Most Americans think of comics as junk for kids, but most don't think about comics at all. It's an uninformed kneejerk reaction. So, on some level I have always believed that if you took the time to explain that comics is a perfectly valid medium of creative expression, and you made your argument clearly and reasonably, people would see the truth. Scott McCloud demonstrates, step by step and in great detail, the vast potential of comics. I can't imagine making it through a few chapters of Understanding Comics and still clinging to an anti-comics prejudice.
Except that human beings don't respond to reasonable arguments, and prejudices are generally immune to logic. And my students were excruciatingly bored by McCloud. In fact, the whole argument that comics is a valid art form is meaningless to my students. Whether or not an art form is "valid" is a question of interest only to academics. Most of my students, if asked about books in general, would say, "I hate reading." They would evaluate a painting based on whether the subject matter is awesome or boring. My students, like most people, approach works of art with the question "Will this entertain me?" and, based on their immediate emotional response, leave either liking it or hating it.

(That is what normal people are like, right? That's what I've been led to believe.)

Most people who are prejudiced against gay people and then change their minds aren't won over by rational argument, but, rather, by having a gay friend. A respected friend comes out of the closet, and the formerly anti-gay individual comes to realize that, hey, my friend isn't so bad, so I guess other gay people aren't that bad either. An individual experience is more powerful than rational argument. We are ruled by emotion, after all.

I don't think I changed anyone's mind. Not one. I had a few students who liked comics going in, and they still liked comics at the end. The kids who said they hated comics at the beginning still hated them at the end, and the kids who didn't care still didn't care. Teachers need to focus on the measurable and achievable goals but, you know, we want to open cracks in the students' minds so that Truth and Beauty can shine in and bring about personal growth and change.
In the last week of class, one of the students who liked comics at the beginning of the semester was talking about Spider-Man or the Hulk or something. Another student, who had gotten good grades overall, said, in a disbelieving tone, "Man, you like comics? That's kid stuff."

As the responsible adult in the room, I responded with, "You now have an F."

You can never focus on one comment from one student, of course--that's a total rookie mistake--but that comment summed up my frustration, my feeling that I was unable to change even one person's mind. That's all conjecture, of course. You never know what long-term effect you have on a student. It's like your co-workers tell you, during your first year of teaching, when all the joy has gone out of life and everything you try seems like a failure, "We're planting seeds. It will be years before they grow, and you'll probably never see the results." Which is actually comforting.

Talk at my school will soon turn to next year's class schedule. If someone comes to me and asks if I want to teach comics class again, I will definitely say yes. Despite the frustration, I know that you can never predict what students will end up getting out of a class. Who knows? Maybe next time, they'll all learn to love comics. Maybe I'll see students carrying around volumes of Neil Gaiman's Sandman or Jeff Smith's Bone.

That may be an impossible dream, but being a teacher requires some of the self-delusion of Don Quixote and the forever-unrewarded dedication of Sisyphus. We are given goals that are literally impossible, and criticized when we fail to meet those goals.
But if there's one thing the comics of Jack Kirby have taught me, it's that when you are faced with impossible odds, you always keep fighting, and you never give up. 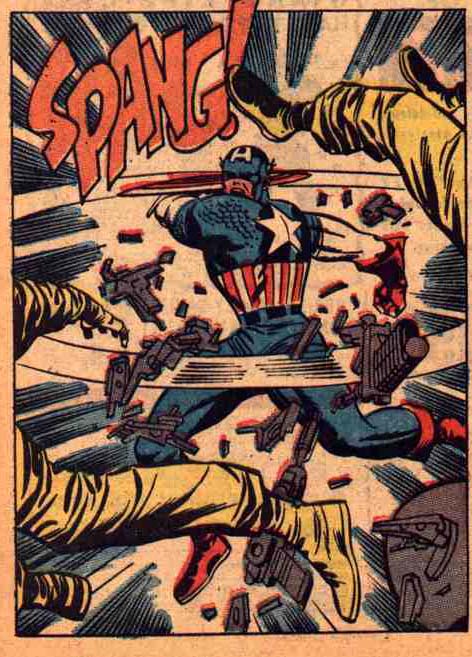 Email ThisBlogThis!Share to TwitterShare to FacebookShare to Pinterest
Labels: class in review, Jack Kirby, scott mccloud, we are all savages ruled by our emotions