And so yesterday--that is, Friday--I assigned the research project. On the one hand, I am disgruntled that we're not going to have much time for it and it's not going to be as elaborate as I had originally dreamed. On the other hand, this is the first time I've taught this class, and it's been a learning experience, so I'm proud that we made it through everything on the syllabus.

Well, almost everything. In an early blog post I listed the texts we were going to read in class, a list I included on the syllabus I gave out on the first day of school.  Let's look and see how I did!

I started off by saying that we would "read, discuss, and frequently refer back to Understanding Comics, by Scott McCloud." Yup, we did that.

In the Graphic Novels category, I said that "we will read at least two of the following in their entirety," and I listed five graphic novels, and we did in fact read two of them. One was Persepolis, and the other I promised never to mention again.

Then I listed supplemental reading. Going down the list. . .

Men of Tomorrow: Geeks, Gangsters, and the Birth of the Comic Book, by Gerard Jones - I did share part of one chapter of this. I couldn't really justify spending more time on it but, man, this is one of my favorite nonfiction books. Highly recommended. The Smithsonian Collection of Newspaper Comics, edited by Bill Blackbeard and Martin Williams - I passed this around the room once. The Smithsonian Collection of Comic Book Comics, edited by Michael Barrier and Martin Williams - Unfortunately, I never used this, even though it's a genuinely wonderful book. It blew my mind when I found it in the college library, all those years ago. Kirby: King of Comics, by Mark Evanier - When we talked about Jack Kirby, I passed this around the room.The Great Women Cartoonists, by Trina Robbins - I flipped through this for ideas but, to my shame, I never used it.I Shall Destroy All the Civilized Planets! The Comics of Fletcher Hanks, edited by Paul Karasik - We read a story from this and I even made them write an essay about it. No, I don't regret that.A Contract With God, by Will Eisner - When I looked at this again I realized it had more nudity than I was comfortable with, so I never showed it to the class.The Portable Frank, by Jim Woodring - I got quite a bit of use out of this. Out of two classes, approximately two students didn't hate it. Bless them.Paul Auster’s City of Class, adapted by Paul Karasik and David Mazzuchelli - I've had this in my classroom, and a kid flipped through it once, but I've never used it.Little Nemo in Slumberland, by Winsor McCay - I showed them a Little Nemo strip and we discussed Winsor McCay's historical importance.Krazy Kat, by George Herriman - I showed them a Krazy Kat strip and we discussed George Herriman's historical importance. Peanuts, by Charles Schulz - We spent a day or two on Peanuts. Who doesn't love Peanuts? More people than I expected.“A Dream of a Thousand Cats”, by Neil Gaiman and Kelley Jones - Never got to this one, unfortunately. I wish I'd squeezed it in.“This Man, This Monster!”, by Stan Lee and Jack Kirby - I really wish we'd read this one. It probably would have been heartbreaking, though; I love this comic so much that I probably would have let the students' derision get to me. “The Girl in Superman’s Past!”, by Bill Finger and Wayne Boring - We did read this one. It's less exciting than the two previous stories, but it's shorter. I used it as an example of a post-Comics Code comic.

So, overall, I did what I said I would. I can sleep easy tonight. But wasn't I originally going to write about the research project? Indeed I was, but this has gotten too long, so I'll save that for another day. 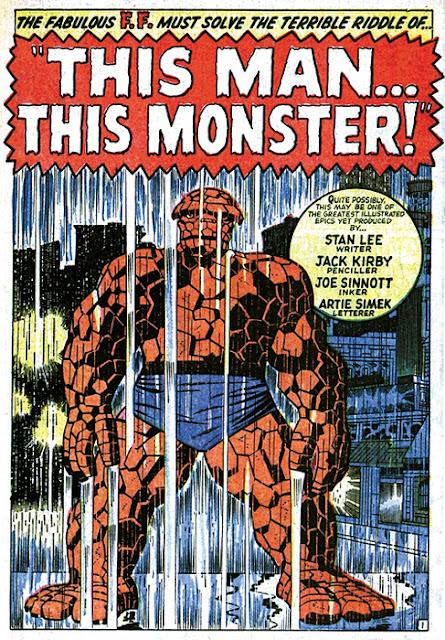 Email ThisBlogThis!Share to TwitterShare to FacebookShare to Pinterest
Labels: looking back, research project, syllabus, This Man This Monster