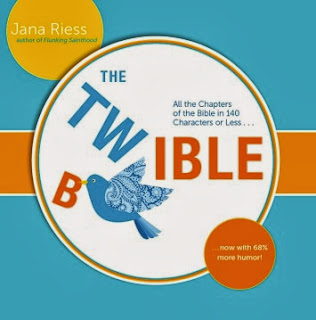 Enough about comics class, let's talk about me.

Summer is an exciting time for a teacher. What to do with two and a half months off work? Go on a vacation? Learn a foreign language? Sit on the couch and watch TV? What I ended up doing was drawing Bible-based cartoons. That's not how I normally spend the summer months, but after my friend Jana read the story "Sedgwick" that I drew for my comic series Laser Brigade, she asked me if I would draw cartoons to accompany her upcoming book The Twible. And I said yes.

The Twible is a project that Jana started on Twitter, where she wrote a tweet for every chapter of the Bible. It turns out that the Bible is 1,189 chapters long, so this took her awhile. Now she's written extra material, including sidebars and summaries and a glossary, and published it as a book. Which is on sale now! That's the cover right there.

Jana originally asked me to draw 20 cartoons for the book, which sounded like a lot, but she ended up hiring me to do 51. Fifty-one! I'd never drawn 51 of anything before.
My biggest obstacle was crippling self-doubt. I am painfully aware of my artistic limitations. There are certain things I feel comfortable drawing, like robots, and things that I feel less comfortable drawing, like things that are not robots. When I first looked at Jana's list of dozens and dozens of scenes and characters she wanted to see illustrated--there is a lot of different stuff in the Bible--it seemed like the job would be impossible. I debated about whether I had an ethical duty to tell Jana that she had made a terrible mistake and needed to hire someone else. My loving wife insisted that I could do it, though, so I soldiered on.

The great thing about a deadline is that you have only a limited amount of time to doubt yourself. And the great thing about a contract is that you have a legal obligation to follow through. So I drew some cartoons. For those early ones, I did a bunch of sketches, and each one went through multiple drafts. Jana seemed to like those, so I continued on, and slowly but surely started to feel like I knew what I was doing. By the end, it was much less of a struggle, and I no longer agonized over every line. The process felt much more natural.

And now I'm proud of the work I did, especially Jael hammering the tent peg into the guy's head and Salome squealing with delight at John the Baptist's severed head. 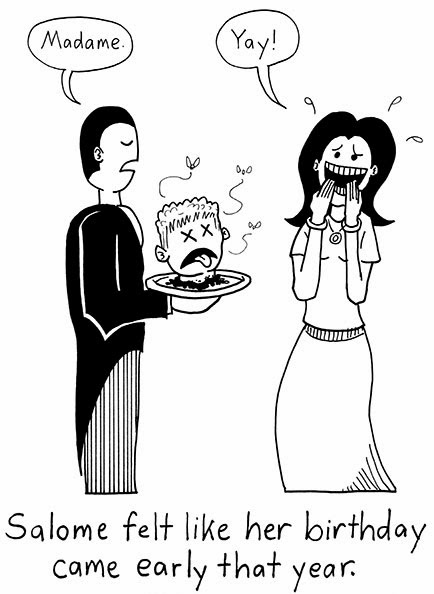