We started school last Wednesday, and today is Wednesday, so that must mean we've been in school for a week. Let's pause and reflect, shall we?

As you may recall from previous blog entries, I'm teaching a one-semester high school elective about comics. The first time I taught this class was in 2011, and I blogged about it extensively. I taught it again in 2012, and blogged about it not at all. This year's already going better than 2012 did, though, so hopefully I will get back into the swing of writing about it.

One change I made this year is to lay more groundwork before we start with our textbook, Understanding Comics. The last two years I jumped right in, which, in retrospect, was a mistake. This year we've had a week's worth of classes and I haven't even passed the books out yet. Instead, we've been doing this. . . 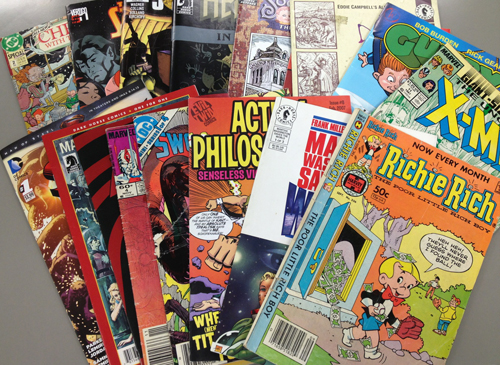 For an introductory activity, I took in a semi-random pile of comics from my basement. See that Richie Rich comic there? If you look inside, the ad for Sea Monkeys has a hole in it. Because when I was a child I cut out the order form and mailed it in. I got my Sea Monkeys from THAT VERY COMIC. That's history, right there. Also pictured: my favorite X-Men comic. Yes, it's that one.

Day 2
Thursday we focused on the terms "medium" and "genre." I realized that we'll use those terms extensively both in this class and in Film Studies, so I need to spend a lot of time on them up front. The students split into two teams and competed to see which team could come up with a longer list of genres of fiction. The winning team got delicious candy. Candy is what educators call an "extrinsic motivator." 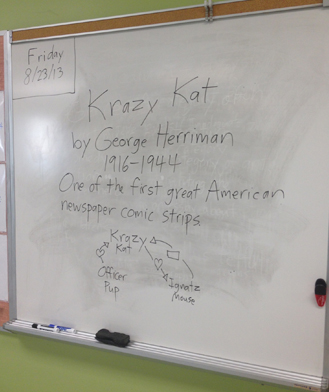 By Friday there were 15 students in the class, and I have about 15 volumes of Krazy Kat reprints, so I realized I could take those in and let each student read Krazy Kat comics. So they read Krazy Kat, and tried to make sense of it, and did some activities.

And yes, my dry erase board was pretty dirty by the third day of school. Don't worry, though, I have since bought a bottle of cleaning fluid.

Day 4
The Krazy Kat activity was new this year, so I wasn't sure how long it would take. It turns out it takes about two days. We finished it up and then I gave them vocabulary words, both comics-specific terms and the tricky words (like "aesthetic" and "juxtaposed") they'll need to understand Scott McCloud's definition of comics.

Day 5
Students drew short comic strips, and labelled the parts. This gave them practice with comics vocabulary words like "panel" and "gutter." For homework, students were assigned to write a paragraph giving their own definition of "comics." 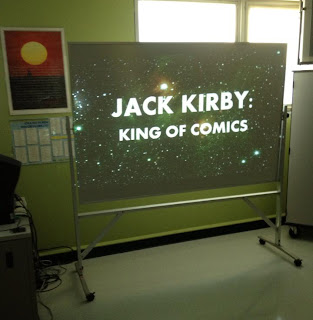 Since today is Jack Kirby's birthday, I started class with a PowerPoint presentation about Kirby. This is the first year I've had a projector in the classroom, so it's exciting to be able to do this, even though I stayed up too late making the slideshow, and the projector stopped working and I had to borrow someone else's, and the board I projected on collapsed, just collapsed right there on the floor . . . so yes, there were setbacks, but it's nice to finally be able to use PowerPoint. That should be a huge boon to this class.

In retrospect, I should have tightened the focus of my presentation. I tried to cover just the highlights of Jack Kirby's career, but he did so much that I barely scratched the surface. I probably should have just picked a decade.

After discussing Jack Kirby, and what he did, and how all that ties in with what we've discussed so far, we looked at the students' definitions of "comics." Tomorrow, we'll read Scott McCloud's definition, and see how that compares.
Posted by LC at 7:45 PM