My Comics Class Go Just Got Up and Went

So here's what happened:
Last year I got the chance to teach a high school class about comics. I created this blog, and wrote about my planning process. Then, when class started, I wrote about how it went. I got into the habit of updating more or less daily.

Creative Reading class lasted for one semester. When the class ended, I kept the blog going for a few more weeks. But then when I wrote a personal reflection on how the class had gone, it felt like an ending, so I said good-bye, at least until the class started up again.

Now summer has passed, and school has started, and I have not updated anything at all. Why? One simple reason, my friends: over the summer, my wife and I went and had a baby. When people ask about him, my standard response has been, "He hates sleeping but he loves to cry." That's generally been true, but a few nights ago he finally slept through the night, and then he did it a few more nights in a row and, knock on wood, this could be the beginning of a beautiful era of sleep.

On the plus side, I can spend plenty of time with each student. And the kids this year seem less generally opposed to reading comics. Some of them are even interested in the idea. Overall they have a positive attitude. I feel good about the kids I have . . . but wow, this is a small class. If two students are absent, that's a third of the class missing. If I put the kids in groups--you get the idea. The whole dynamic has changed. It's not terrible, and it's certainly not an insurmountable problem, but it's a big adjustment to how I teach the class.

Today was Day Five, so we are still in the early stages. I'm figuring out how this is going to work. I might keep you posted. Then again, the baby boy and the little girl take up an awful lot of my time. We'll see.

In other news, today would be the 95th birthday of Jack Kirby, the greatest American comic book artist of the 20th century. Happy birthday, Jack! You may be gone, but your work lives on. 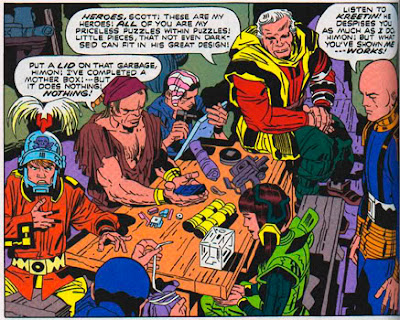