We live in the Golden Age of Comic Strip Reprints. Behold: 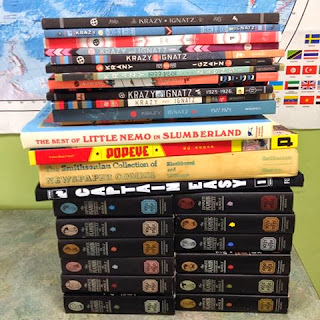 These are the books I took in last week, to use as visual aids as we focused on newspaper comic strips. Want to read a Krazy Kat Sunday page? There they all are on the top of that stack, 1916 to 1944, collected in 13 beautifully designed volumes. And there at the base are 24 years worth of Peanuts comics, including all the glory years of the 1960s. I started bringing the books home today. They're heavy; it takes awhile to transport them.

Here are the books I brought in for our discussion of Superman: 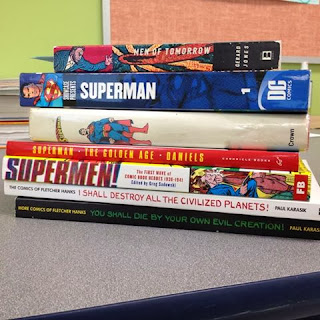 Men of Tomorrow, on the top there, is prose, not comics. It's probably my favorite nonfiction book I've ever read.  I can't recommend it highly enough. It gives the whole story of Jerry Siegel and Joe Shuster, of how they created Superman when they were still kids, and how they sold the rights for one hundred American dollars, and the long sad history of lawsuits and poverty and heartbreak that followed.

The third book down is Superman from the 30s to the 80s, a slightly later edition of the book I checked out from my school library in 1983 and read cover to cover. Out of all the stories that are reprinted in this book the one that stuck with me over the last thirty years was "The Girl From Superman's Past," Over time all the other details from this book faded (at least until I bought a used copy a few months ago) but I always remembered the story about college-age Superman falling in love with a mermaid.

"The Girl From Superman's Past," AKA the Lori Lemaris story, originally saw print in Superman #129 back in 1959. It was written by Bill Finger and Wayne Boring, two creators who don't get enough credit. Wayne Boring doesn't get talked about much these days, even though he basically defined the look of Superman. Bill Finger is pretty much the textbook example of a comic book creator who doesn't get enough credit--in fact, it's contractually required that he not get the credit he's due--but we'll talk about that more later, when we get to Batman.

So many Superman comics focus on various romantic entanglements or schemes or rivalries that ultimately come to nothing. Because "The Girl From Superman's Past" is, obviously, set in Superman's past, it can tell a story of doomed romance that has a beginning, middle, and end, with no need for maintaining some kind of romantic status quo.

There's a melancholy tone to these old Superman stories that I find appealing. Superman's a great guy, and he does what he can to help people, but his home planet blew up, his foster parents are dead, he can't commit to a romantic relationship, and there's no one else like him in the world. "The Girl From Superman's Past" is literally a children's story where the hero reminisces about the only woman in the world he was ever willing to marry, and how it turned out that the two of them could never be together. "And now he will always be alone. THE END." 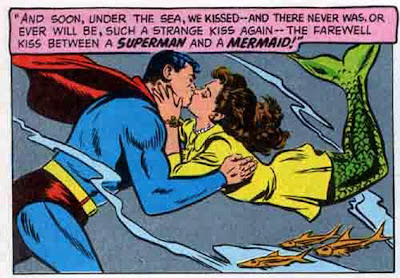 My students' homework for tomorrow is to read "The Girl From Superman's Past" and answer questions about it. Will they respond to this story's wistful melancholy as enthusiastically as I did? Almost certainly not, but I'll let you know.
Posted by LC at 7:35 PM